Taylor Swift made a sensational performance at London’s Hyde park to celebrate the arrival of summer in The British Summer Time Festival which in turn stupendously made the whole performance as one of the highly acclaimed best performances of her entire lifetime musical journey. Moreover, as expected, the crowd was completely overwhelmed with the unmatchable musical performance by Taylor Swift and they chanted the slogan “TAY-LOR SWIFT, TAY-LOR SWIFT, TAY-LOR SWIFT,….” which echoed with cheers accompanied along with screams that carried across the whole stage which also appeared as the whole festival fever was set on like a rolling fire.

Besides, as we all know, Taylor Swift is not only sought-after for her stellar musical performance but also the gorgeous silhouette that she carries along every time and even this time with no disappointment, she showcased a new trend of: how to wear a purple metallic skirt unbelievably good? and she answered the same by pairing it along with the glittery black sleeveless crop top and an aqua sequined bomber jacket, which looked absolutely fantastic and also gave us the evidential proof of eye drooling situation from the audiences over there. Plus, Taylor Swift didn’t stop there either but instead she carried along with her trademark symbol of red lips and a natural glow looking dewy skinned makeup that ticked all the boxes of stunning summer light makeup look. Additionally, the blonde looked fabulously illuminant by having a flawless skin showing everywhere from head to toe including the exposed parts of midriff and her famous, long pinned legs and to the end, she finished off her summer look faultlessly by paring the outfit along with a pair of white framed sunnies which matched exemplarily well with the stripy border of her bomber jacket.

So, having talked more about her purple metallic skirt, which was off course bucketed in my wish list as I am a huge fan of Taylor Swift and I am one of those persons who goes utterly maniac when it comes to Taylor Swift’s fashion and beauty associates and that’s why, this time having got hooked up with the shining purple skirt, I was looking for a wonderful matching eye shadow that can literally align parallel with the purple skirt (which I am going to purchase in the mere future) and so, with all the excitement, I popped on to the MAC beauty counter and I was looking at all of the shades that were displayed over on the shelves as if I am going to buy the whole beauty items but instead sensibly I just grabbed the right shade that I was looking for, which was none-other-than MAC A83 FARD A PAUPIERES eye shadow.

Subsequently, having made the purchase myself, I was all geared up to open the eye shadow box immediately after coming back home straight away and without any hesitant, I opened up the black matted MAC eye shadow box that showed up the white coloured written descriptions of the eye shadow hue and after that, there it came the rounded glossy box container which had the calligraphed black inscriptions of MAC label on top of the lid and the box was filled with shimmery purple eye shadow with the addition of real hint of gold and copper hued glittery sparkles, which was glowing with glory and shining with glee. Then I proceeded to open the lid and followed to make a debut swipe on the eye shadow, which was powdery, high-pigmented, soft, creamy in texture and it was so smooth that it literally stuck on to my fingers straight away and the depth of the swatch was so intense that it hit my mind instantly that it would be a perfect eye shadow to create a purple smokey eye look.

Finally, I am pretty much happy with this sensible buy and I hope you think the same as well. 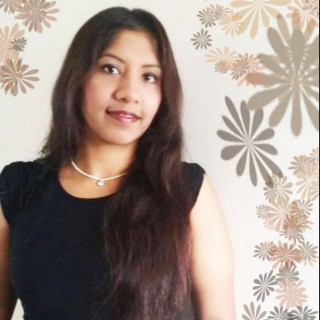